Improve your military to civilian resume by using our writing tips and resume sample below for guidance. 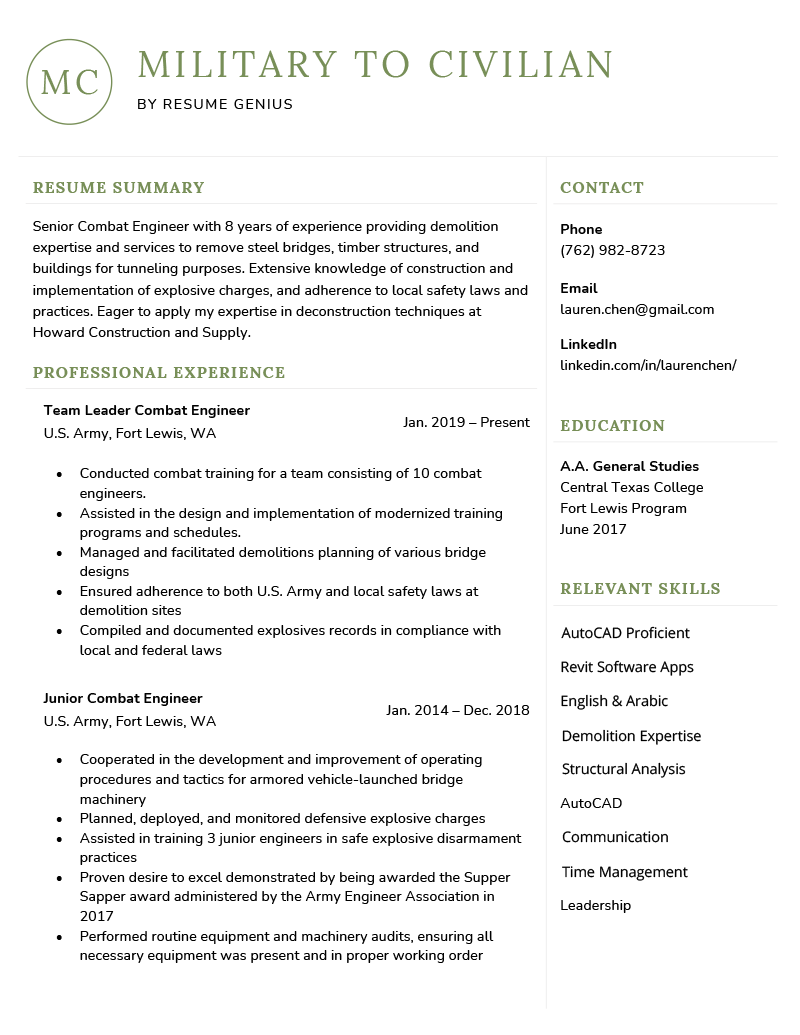 Not in love with this template? Browse our full library of resume templates. 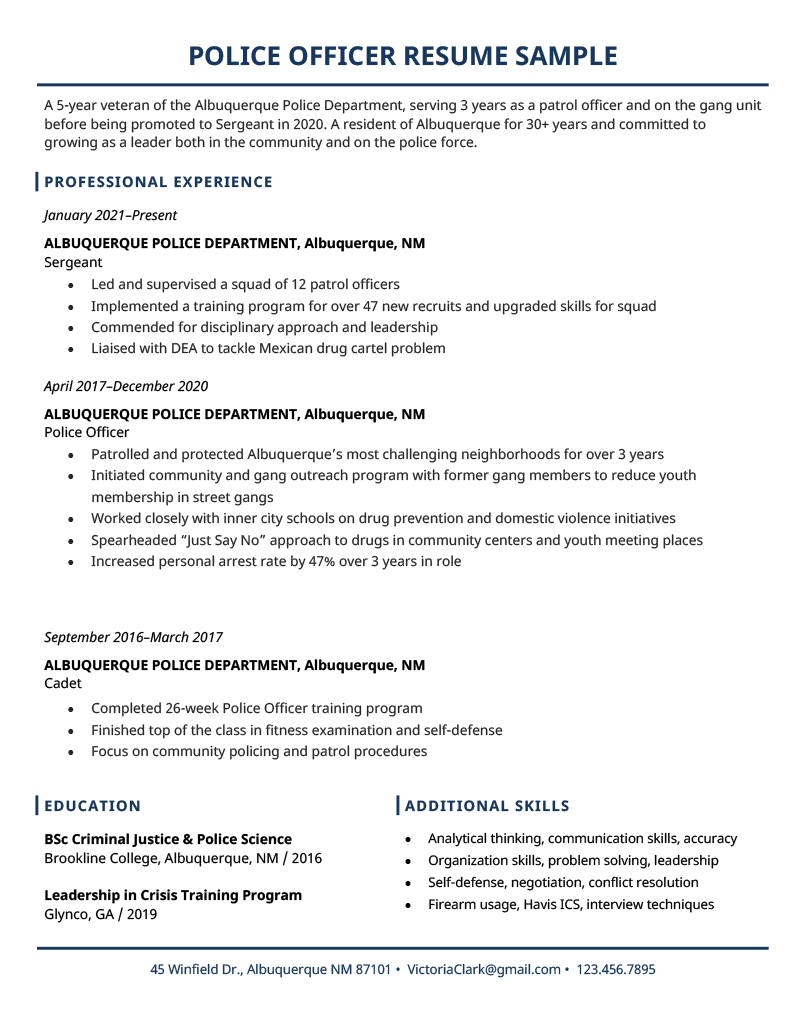 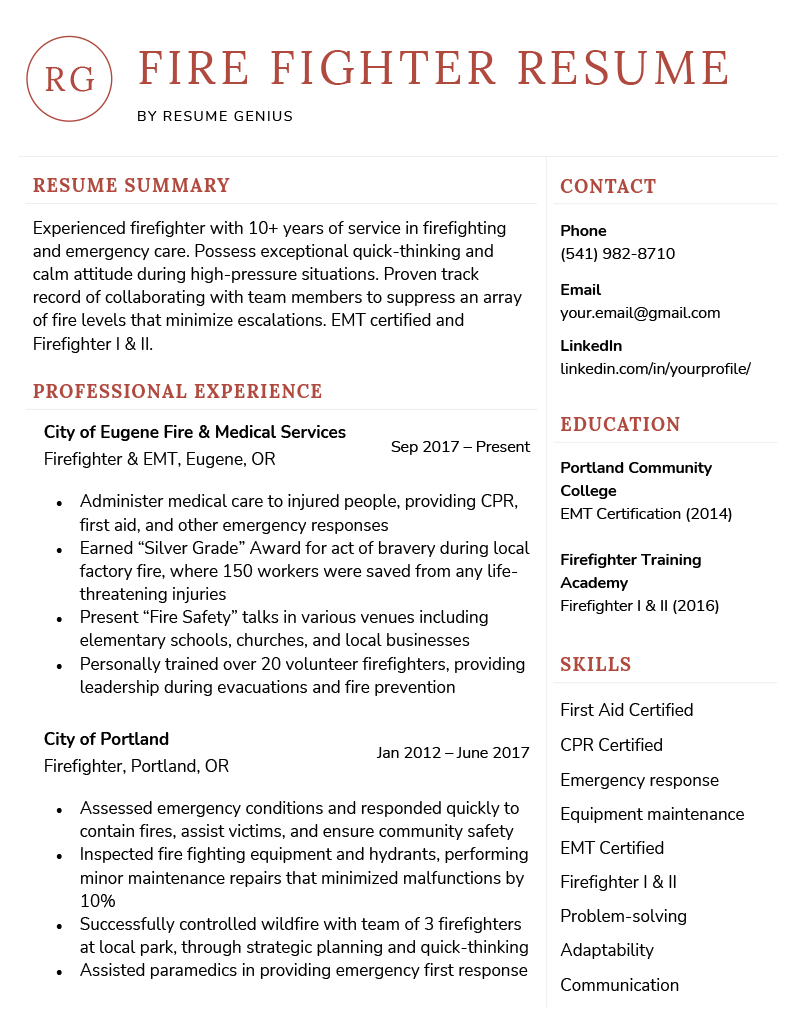 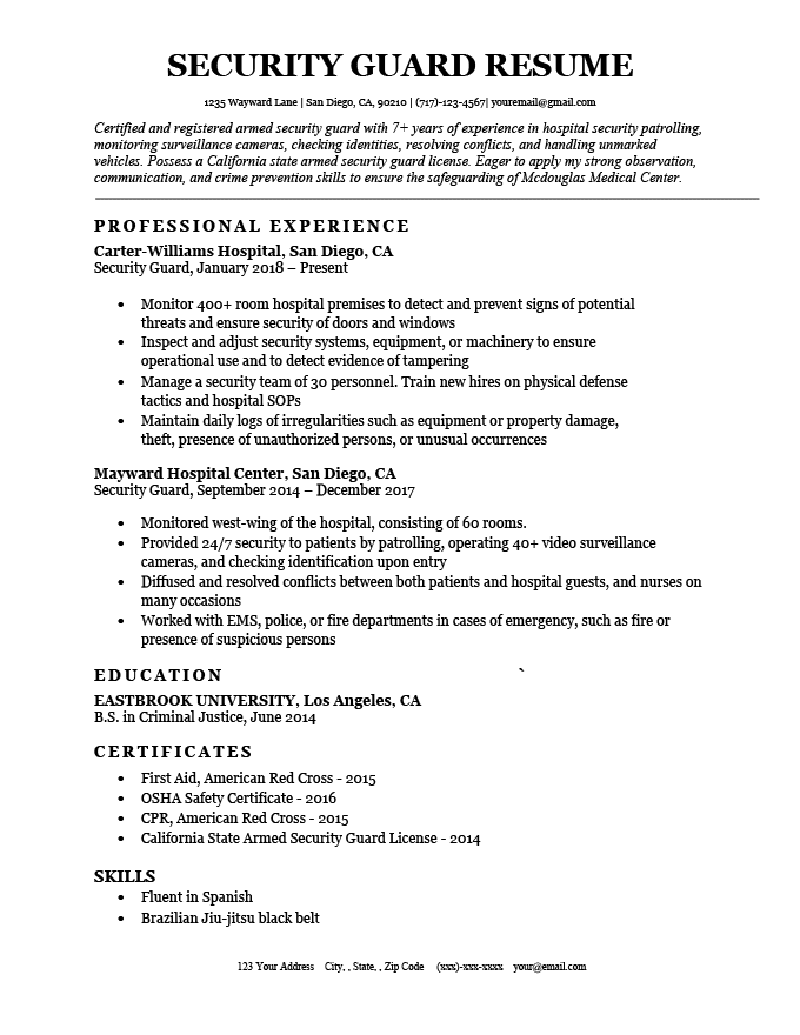 Make sure you choose the right resume format to suit your unique experience and life situation.

Senior Combat Engineer with 8 years of experience providing demolition expertise and services to remove steel bridges, timber structures, and buildings for tunneling purposes. Extensive knowledge of construction and implementation of explosive charges, and adherence to local safety laws and practices. Eager to apply my expertise in deconstruction techniques at Howard Construction and Supply.

3 tips for writing a great military to civilian resume

Before you start writing, make sure you know how to write a resume in a way that best emphasizes your strengths.

Serving your country is no easy task, and neither is transitioning to a civilian job once you’ve been discharged from the military. Although the military doesn’t require writing resumes to move up in rank, you’ll need to write a military to civilian resume to move onto your new civilian career.

Writing a successful military to civilian resume depends on what industry you want to enter upon exiting the military. Each industry requires relevant work experience and will want to see a set of industry-specific skills on your resume. Unfortunately, there’s no “one size fits all” approach here.

However, there are some basic ways to show employers how your military experience is relevant and improve your chances of landing a civilian job.

Here are three tips any MOS, NEC, or AFSC should keep in mind when writing a military to civilian resume. Examples will be listed throughout the text to give you a rough idea of what to write about (even if your industry isn’t listed).

1. Plan your career path before being discharged

This might sound obvious, but it’s essential that you know what you want to do before being discharged from the military. It’s common for veterans to find themselves lost when entering civilian life, and unsure how to start their career.

You need to have a plan for what you’re going to do once you transition out of the military, so you can target a certain industry when writing your military to civilian resume.

Different industries will require certain skills sets and experience, and it’s good to know how the experience and skills you gained in the military will transfer to a relevant civilian career.

Don’t make the mistake of leaving the military without a plan. If you’re not sure where to start, there are a multitude of veteran employment services run by the VA and other organizations that can help you transition from military to civilian life.

2. Focus on your transferable military experience and skills

Depending on what job you performed in the military, you likely have a variety of transferable hard and soft skills.

For example, a prior Air Force Technical Aircraft Mechanic specialist has skills that translate directly into aviation maintenance and repair. Targeting airlines or logistics companies like FedEx and UPS, as well as aircraft manufacturers like Boeing, will likely be an easy career transition.

However, not every veteran is going to have directly transferable skills. What if you were an infantryman and now want to step into a corrections officer position? How about if you were a human resource specialist and want to become a financial analyst? Convincing employers that you’re the right person for the job won’t be so easy.

If you’re confused about what skills and qualifications will be needed for the industry you’re looking to transfer to, you can look at job postings and advertisements. Most employers will state exactly what qualifications they’re looking for in the job description.

However, regardless of the industry, here’s a list of ten great soft skills that any employer will love to see on your military to civilian resume:

Additionally, if you’re unsure what type of career might be appropriate for you, try using military.com’s skills translator to see what types of civilian jobs your skills are transferable to.

Seeking out higher education is also a great way to gain some valuable skills. If you qualify for GI Bill benefits and are struggling to find a job after being discharged from the military, consider pursuing a bachelor’s or master’s degree. If you’re applying for a master’s program you’ll need a grad school resume.

3. Don’t overuse military acronyms or jargon in your resume

In the military, you’re trained to speak using acronyms or jargon that wouldn’t make much sense to a civilian. For example, if you tell your friend that your MOS was 11B in the Army, they likely won’t understand what either acronym means unless they’ve been around a lot of veterans. This concept goes for hiring managers as well.

Now, in the above example you could swap 11B for “infantry”, but hiring managers may also not know what exactly an infantryman does. It’s important to make your military experience clear by translating military terms into words that civilian hiring managers will understand.

To help you, we’ve included an example of a combat engineer’s summary of qualifications, and an infantryman’s work experience, with some military acronyms translated in civilian-friendly terms.


Notice how the combat engineer in the example states exactly what structures they worked with (steel bridges, timber, tunneling and retaining walls). Additionally, instead of “OER” or “counseling statements”, “individual” and “team reviews” were used. This makes the candidate’s experience easier to understand for employers who have no military background.

Notice how the candidate mentions “junior soldiers”, instead of using words that might be more difficult for people to understand such as “squad” or rank insignias. You could also swap “junior soldiers” with “junior employees”, but either will do. “Base manager” was also used to represent the Tactical Operations Center (TOC). “Assignments” was chosen instead of “mission”.

Additionally, when writing about your work experience it’s important to use action verbs and to quantify your accomplishments using hard numbers. Notice how the number of junior soldiers (5 in total) was listed, and exactly by how much (20%) retention increased because of the candidate’s leadership skills.

Hard numbers help hiring managers grasp exactly how much of an impact you made at an organization.

Lastly, here are some more examples of common military terms and how they’re translated into civilian-friendly language.

Other Great Resumes & Cover Letters from this Industry:

45+ Resume Summary Examples (& How to Write)

How to Make Your Perfect Resume (4+ Examples)

Thanks for downloading our free template!

Would you leave us a review?

We hope we’ve helped you on your path to career success. If you have time, a quick review would really make our day (it'll only take 10 seconds).

Please check your download folder! We have sent you our Free Resume Template pack

Thanks again, and good luck!